Fathoms: The World in the Whale by Rebecca Giggs 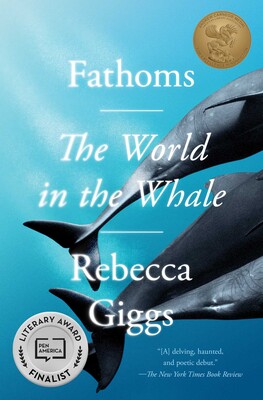 What do we have to do with whales, and whales with us? Here in the Midwest, it can seem as if we’ve forgotten about each other entirely. But if there’s one thing Rebecca Giggs’ Fathoms: The World in the Whale makes clear, it is that to consider the whale is to consider ourselves. A few examples, just from the first 100 pages: that whaling was the first truly global industry, displaying, at first, man’s ingenuity and determination (How to kill a whale and bring it ashore? A feat of engineering, to be sure . . . ) and later, our greed, carelessness, and relentlessness, driving whales, and therefore the whole industry, to the brink of extinction. In the 80s, the Save the Whales campaign was one of the first examples of the triumph of humanity over capitalism, succeeding in putting enough restrictions in place (even at the cost of industry) to bolster a flagging population; and yet, forty years on, we seem only to have saved the whales from immediate extinction in favor of a longer, more painful one. Today whales are so full of plastics and chemicals that consumption of their meat has caused Inuit mothers’ breast milk to become so toxic, it couldn’t legally be transported across state lines in any container other than a breast. And another stunning, awful irony: the first prototypes of plastic were made from whale oil, only to be developed into the material that a) reduced the need for whale oil, therefore slowing whaling but also b) turning into the material that, the ingestion of which, is ultimately dooming the whale population today.

Giggs dissects the whale, interrogating its health and status on our planet, as well as its relationship to humans, which might sound academic—but she does so in fluid,  lyrical prose. Some of the images here are nothing short of poetry. This book won the prestigious Andrew Carnegie Medal for Excellence in Nonfiction, and deserves it. Fathoms is a beautiful, tender, and painful read, well worth your time.