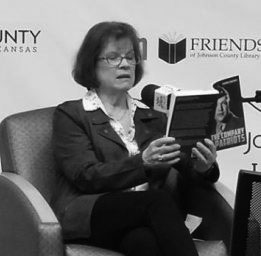 Virginia Brackett, the author of 15 books, discusses her 2019 family memoir, In the Company of Patriots. She reveals how she used family stories, scrapbooks, letters, and interviews to trace the life of her father, Captain Edmund C. Roberts, who was killed in the Korean War when she was only eight months old. The Park University Professor Emeritus of English also talks about how she came to writing later in life, after first getting degrees in medical technology and business before studying literature. Her varied publications include a critical companion to Mary Shelly, biographies of literary figures from Virginia Woolf to Sandra Cisneros, as well as businessmen, Steve Jobs and Jeff Bezos. Brackett discusses how the dream of writing about her father has been with her since she wrote her first award-winning essay about him in her twenties, before she turned towards other pursuits, and was reignited while working with veterans writing about their experiences.