Geoffrey Brock and Padma Viswanathan I 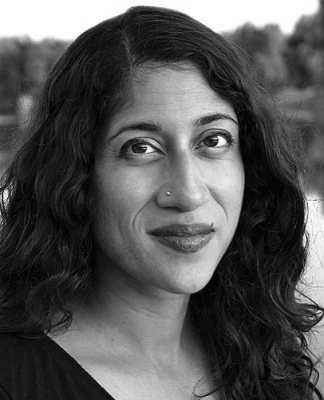 n the first half of this conversation with novelist Padma Viswanathan (shown) and poet Geoffrey Brock, the husband and wife writing duo reveal how they balance their writing careers and family life. Brock reads one of his wife’s favorite poems from his Anthony Hecht Poetry Prize-winning collection, Voices Bright Flags, while Viswanathan shares pieces from her novels The of Toss of a Lemon and The Ever After of Ashwin Rao and explains the large role that research has played in her writing. She also discusses how her early career as a playwright influenced her fiction and the structure of her novels. A 2017 recipient of the Porter Fund Literary Prize, Viswanathan’s translation of the novel St. Bernardo, by the late Brazilian writer Graciliano Ramos, is forthcoming from New York Review Books. This program also includes a poem from Geoffrey’s father, the late Van K. Brock, from his 2005 reading at The Writers Place in Kansas City.